It was 13 years ago today that Linode opened its doors and earned its first customers. Now, 13 years later, it’s amazing how much we’ve grown. According to a study by CloudHarmony, Linode is the 4th largest cloud provider to the top 10,000 Alexa websites, following only Amazon, Rackspace, and IBM. Not bad. We have helped over half a million customers, launched nearly 12 million Linode servers, and now have more than 100 employees, all while remaining independent and privately owned.

None of this would have been possible without the dedication and engagement of our employees, who care a great deal about you, our customer, and about the work we do. We’ve attracted some of the most passionate, brilliant, and handsome people I’ve ever met (BTW, we’re hiring). So, a big thanks to everyone here at Linode.

We also want to thank you for your business and support all these years. As a token of our gratitude, we’re announcing free RAM upgrades for both new and existing customers. Here’s the breakdown: 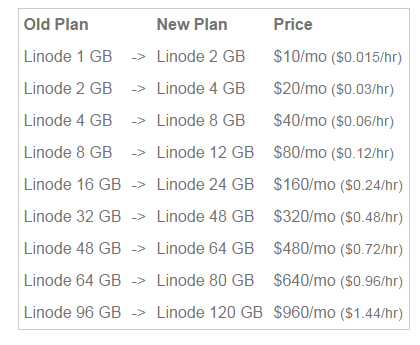