We're back to offer a huge 50% off all Flexible Resources and Fixed Instances at our Australian sites through till 31st October!

Need more reasons to consider Australia as your next site for DediServe services? How about;

Connectivity upgraded in Tokyo, Japan
Firstly, many thanks for your feedback on our new Tokyo location!

All feedback is welcomed and useful, and thanks to your responses we have been able to identify and address routing issues to certain parts of the globe from our new Tokyo location.

The site has been upgraded as a result, and now has higher throughput and lower latency to a large portion of the world! In celebration of this we are extending our June promotion till the end of July, get your even faster Tokyo Resource now!

To take advantage of this special deal, either enter offer code: JP2018 before purchasing or click the designated link below.
https://manage.dediserve.com/cart/


In a way, modern microprocessors act like attentive butlers, pouring that second glass of wine before you knew you were going to ask for it.

Here, she was referring to a common trick that most CPUs now employ: anticipating what the program is about to do and start doing it before it has been asked to – for example retrieving data from memory. The result, of course, is increased speed and efficiency, which are two of the main metrics we've been testing and comparing during the last week or so.

In our recent bench marking exercise, we tested our new Melbourne-based cloud platform against offerings from Vultr, DigitalOcean, and AWS. The platforms' specs were as follows:

To see how our cloud platform stacks up against the mainstream competitors, we conducted five different tests in total – here's what we found:

1. UnixBench
Running the UnixBench application provided us with a great overview, as it tests various aspects of server performance – including CPU, RAM, disk, I/O – and then gives an overall score. We were delighted with a result of 2491.5 –positioning us as the clear winner against other key industry players.

Experience powerful, simplified, enterprise-grade SSD cloud from the world's largest OnApp provider – build your own cloud in minutes with DediServe 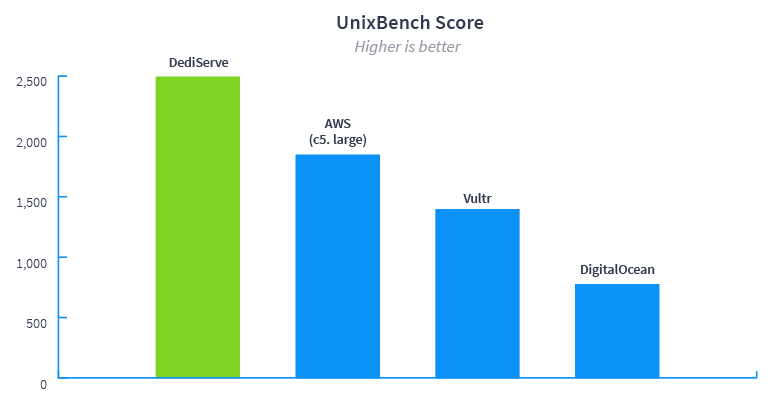 2. SSD Storage Read Speeds
After performing several runs, we came out with an average speed of 109,616 read operations per second – more than twice as fast as Vultr. It's these lightning speeds that ensure our customers' websites can run quickly, with near instant access times and high throughput.

While DigitalOcean may employ impressive read cache technology to increase read I/O, the flip side is that write speed suffers – we found the provider's average speed to be less than half that of DediServe, at 11,062.

4. Combined Read and Write Speeds
Thanks to their restrictive storage model, AWS's I/O performance results provided the starkest contrast of all. In a real-world setting, a business could only hope to improve such low results by taking one measure: spending a lot more by purchasing much larger quantities of storage.

5. Deployments
In the time it's likely taken you to reach this point of the post, our cloud platform could be deployed. On average, it took 38 seconds to have a server ready for use from clicking «Build»

Final Thoughts
There's one more important metric we'd love to benchmark, but – as the required data isn't publicly available – we can't. In an ideal world, we'd compare data for things like ticket backlog, resolution rate, and average first response time. Unfortunately, we can't provide you with customer support benchmarks, but we can tell you how we approach the area.

Our friendly team of experts provides comprehensive 24/7/365 support as standard. With round-the-clock monitoring and alerting, and a 15-minute maximum response time, we offer a fully-managed infrastructure service. It's this level of support that our customers comment on, time and time again.